AWARD: Indie Book Of The Day Nominated By A Reader

Posted on November 4, 2012 by The Persecution of Mildred Dunlap 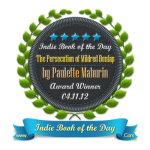 The Persecution of Mildred Dunlap by Paulette Mahurin

A women’s Brokeback Mountain. The year 1895 was filled with memorable historical events: the Dreyfus Affair divided France; Booker T. Washington gave his Atlanta address; the United States expanded the effects of the Monroe Doctrine to cover South America; and Oscar Wilde was tried and convicted for gross indecency under Britain’s recently passed law that made sex between males a criminal offense. When news of Wilde’s conviction went out over telegraphs worldwide, it threw a small Nevada town into chaos. This is the story of what happened when the lives of its citizens were impacted by the news of Oscar Wilde’s imprisonment. It is a chronicle of hatred and prejudice with all its unintended and devastating consequences, and how love and friendship bring strength and healing.

Get this book via:

From the time I was ten year old, I’ve loved to write. While in college I wrote two award winning short stories. This encouraged me to continue to write, and write I did but never completed any of my novels due to other responsibilities: education, jobs, family, etc. After attending and receiving a Master’s Degree in the Nurse Practitioner Program at UCLA, I went to work in the second busiest emergency room in Los Angeles county. I saw and learned about things that haunted me, until bit by a tick and diagnosed with Lyme Disease (which went to my heart valves, brain, and muscular skeletal system) knocked me down and afforded me time to write and release the memories onto pages before me. I wrote, and wrote, and released what was stored inside, which finally gave way to a story that was to change my life, The Persecution of Mildred Dunlap. When I began to feel better, I joined a writing class, in Ojai, CA, where I live. The teacher, Deb Norton (screenwrite/playwrite of The Whole Banana) had us do an exercise involving a photo. We were to write a 10 minute mystery. The photo I picked was of two women huddled close together in clothing that looked circa turn of the twentieth century. I made them a Lesbian couple trying to avoid being found out. In my research, I came across Oscar Wilde’s imprisonment. Britain had recently changed it’s laws to make homosexual activity, a man having sex with another man, a criminal offense resulting in a two year hard labor prison sentence. The combination of the photo from that writing class and Oscar Wilde’s imprisonment were the seeds that started the story, six years in the making. For those six years, I studied Wilde, the history of Lesbians, western settlement in the United States, and I opened to what it must have been like to live in fear of being persecuted because of the nature of one’s existence, that can no more be changed than the color of grass. As I wrote, I saw myself in the characters who I dialogued with, related with as if we were friends today, and in doing this I learned that external factors may change (the environment, technology, family relating, etc.) but the nature of the human condition and how we manifest remains the same. There will always be stories to tell, to write, to read, to appreciate, because we invest in literature from our humanness, our emotional composition, and we relate to the imagery created with narrative and dialogue that suit our preferences. We are drawn in, over and over and over again, to similar story lines, themes, sequels, because of this human experience–that in sitting down before a book or ebook, we are transcended out of our ordinary lives to magical places that written words create, no matter how similar or repetitive the story, because,after all, we are all living, breathing, stories.

Thank you for arriving at my page. I hope you read and enjoy my story.

Embed on your blog or site:

The year 1895 was filled with memorable historical events: the Dreyfus Affair divided France; Booker T. Washington gave his Atlanta address; Richard Olney, United States Secretary of State, expanded the effects of the Monroe Doctrine in settling a boundary dispute between the United Kingdom and Venezuela; and Oscar Wilde was tried and convicted for "gross indecency" under Britian's recently passed law that made sex between males a criminal offense. When the news of Wilde's conviction went out over telegraphs worldwide, it threw a small Nevada town into chaos. This is the story of what happened when the lives of its citizens were impacted by the news of Oscar Wildes' imprisonment. It is chronicle of hatred and prejudice with all its unintended and devastating consequences, and how love and friendship bring strength and healing. Paulette Mahurin, the author, is a Nurse Practitioner who lives in Ojai, California with her husband Terry and their two dogs--- Max and Bella. She practices women's health in a rural clinic and writes in her spare time. All profits from her book are going to animal rescue, Santa Paula Animal Shelter, the first and only no-kill shelter in Ventura County, CA, where she lives. (see links below on Ventura County Star Article & Shelter) To find out more please go the The Persecution of Mildred Dunlap on facebook or Amazon or e-mail us at the gavatar addresses. Thank you. (photos: of Paulette, her family, and a reading at The Ojai Art Center, July 2012)
View all posts by The Persecution of Mildred Dunlap →
This entry was posted in AWARDS. Bookmark the permalink.