Posted on March 12, 2014 by The Persecution of Mildred Dunlap 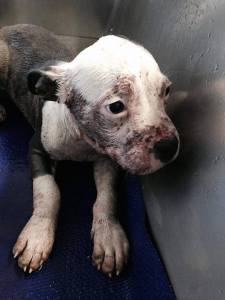 Luther when he first came in. 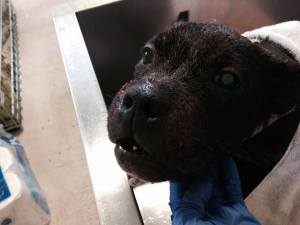 Lonnie when he first came in.

Comment on photo from SPARC: Luther before and after. He and brother Lonnie were caked in dried blood and feces. We speculate that he and his brother were still nursing from mom, Lola, and seeking comfort and protection from her. Lola was suffering severe blood loss and deep bites to her leg. Was she injured trying to protect her puppies? Look how relaxed Luther looks after a little TLC. SPARC staff and volunteers will continue to shower them all with love, good food, clean water, warm blankets, vet care and we will watch them ALL blossom…together. Meet them all and watch their progress here…and thank you to everyone who supports their long journey…home.

Comment from SPARC: WE NEED TO BORROW XL CRATES TODAY ! BRING THEM TO THE CENTER OR CALL SPARC at 525-8609
UPDATE: Lola is in surgery for her injured leg and to close multiple wounds. She was in shock from blood loss.

All photos and newspaper and TV reporting of these severely abused dogs can be found at: https://www.facebook.com/santapaulaarc

On 03/11/14, Santa Paula Animal Control was dispatched to a call of 4 to 5 dogs being mauled in the backyard of a residence in the 500 block of N.14th Street. Upon arrival, there was an obvious sounds of what appeared to be a dog fight to the rear of a residence. Santa Paula Animal Control Officer separated the dogs and requested the assistance of Santa Paula Police Officers. Several dogs were found injured to the rear of the residence. With the assistance of the Ventura County Animal Control and the Humane Society, a total of 16 dogs were removed from the property.
Evidence of dog breeding was located on the property as well as evidence of dogs being trained to fight including an agitator stick, cropped ears and clipped tails on the dogs, and various stages of wounds healing on the dogs. At this time no arrests have been made and the investigation is ongoing. The owner denied any allegations of wrongdoing.
Update: The suspect is identified as Silvano Moses Duran, 28 years old of Santa Paula.
Current Charges: Penal Code 597(a), Additional Charges Pending Investigation.

The year 1895 was filled with memorable historical events: the Dreyfus Affair divided France; Booker T. Washington gave his Atlanta address; Richard Olney, United States Secretary of State, expanded the effects of the Monroe Doctrine in settling a boundary dispute between the United Kingdom and Venezuela; and Oscar Wilde was tried and convicted for "gross indecency" under Britian's recently passed law that made sex between males a criminal offense. When the news of Wilde's conviction went out over telegraphs worldwide, it threw a small Nevada town into chaos. This is the story of what happened when the lives of its citizens were impacted by the news of Oscar Wildes' imprisonment. It is chronicle of hatred and prejudice with all its unintended and devastating consequences, and how love and friendship bring strength and healing. Paulette Mahurin, the author, is a Nurse Practitioner who lives in Ojai, California with her husband Terry and their two dogs--- Max and Bella. She practices women's health in a rural clinic and writes in her spare time. All profits from her book are going to animal rescue, Santa Paula Animal Shelter, the first and only no-kill shelter in Ventura County, CA, where she lives. (see links below on Ventura County Star Article & Shelter) To find out more please go the The Persecution of Mildred Dunlap on facebook or Amazon or e-mail us at the gavatar addresses. Thank you. (photos: of Paulette, her family, and a reading at The Ojai Art Center, July 2012)
View all posts by The Persecution of Mildred Dunlap →
This entry was posted in ANIMAL RESCUE, ANIMALS, DOGS NEED HOME, DOGS RESCUED, Santa Paula Animal Rescue Center. Bookmark the permalink.