Posted on December 18, 2015 by The Persecution of Mildred Dunlap
Again and again, I’m grateful for everyone who has purchased a book and taken the time to write a review. All profits from my books are going to help rescue dogs out of kill shelters. A few of the recent ones are featured below.
5.0 out of 5 starsNone so blind …
ByPatricia Son December 18, 2015
Format: Kindle EditionVerified Purchase

To Live Out Loud, an historical novel by Paulette Mahurin, hit me like a combination of To Kill a Mockingbird and The Crucible. In the violently anti-Semitic France of 1895, Alfred Dreyfus, a Jew, was convicted of treason in a hasty military court martial. Emile Zola, already a noted “man of letters,” picked up the Dreyfus case and went through numerous court proceedings to exonerate Dreyfus.

This novel is exceptionally timely in today’s world. In America, at least, there is a pervasive bigotry against Muslims, with the bigots espousing that every Muslim is a terrorist. Muslims today are subjected to the same sense of hostility and hatred Jews of 1900 France or African Americans of 1950 (and ongoing) America experienced, leading the reader to question whether we as a people will EVER learn.

This novel intentionally reads more like a newspaper article or a documentary than a fictional story. As the author explains in her foreword, To Live Out Loud is based strongly on documented historical fact and court records, letters, and transcripts of the time. The Dreyfus Affair, as it was known, is an example of one of the grossest, most egregious miscarriages of justice in French history, and is a warning to us even today of the ongoing imperative for the separation of church and state.

LINKS FOR THE PURCHASE OF MY BOOKS AND REVIEWS
http://www.amazon.com/s/ref=cm_cr_pr_pdt_bl_sr?ie=UTF8&field-keywords=Paulette+Mahurin
Some of the dogs rescued with profits from my books: 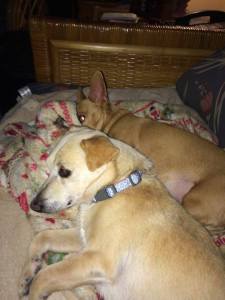 To date, in 2015, profits from my books have helped free 138 dogs from kill shelters. Happy Holidays from them and my family to all of you. Peace on earth.

The year 1895 was filled with memorable historical events: the Dreyfus Affair divided France; Booker T. Washington gave his Atlanta address; Richard Olney, United States Secretary of State, expanded the effects of the Monroe Doctrine in settling a boundary dispute between the United Kingdom and Venezuela; and Oscar Wilde was tried and convicted for "gross indecency" under Britian's recently passed law that made sex between males a criminal offense. When the news of Wilde's conviction went out over telegraphs worldwide, it threw a small Nevada town into chaos. This is the story of what happened when the lives of its citizens were impacted by the news of Oscar Wildes' imprisonment. It is chronicle of hatred and prejudice with all its unintended and devastating consequences, and how love and friendship bring strength and healing. Paulette Mahurin, the author, is a Nurse Practitioner who lives in Ojai, California with her husband Terry and their two dogs--- Max and Bella. She practices women's health in a rural clinic and writes in her spare time. All profits from her book are going to animal rescue, Santa Paula Animal Shelter, the first and only no-kill shelter in Ventura County, CA, where she lives. (see links below on Ventura County Star Article & Shelter) To find out more please go the The Persecution of Mildred Dunlap on facebook or Amazon or e-mail us at the gavatar addresses. Thank you. (photos: of Paulette, her family, and a reading at The Ojai Art Center, July 2012)
View all posts by The Persecution of Mildred Dunlap →
This entry was posted in ACTS OF KINDNESS, ANIMAL RESCUE, Canine Adoption Rescue League, DOGS & CATS, DOGS & CATS GOING HOME, DOGS RESCUED, EMILE ZOLA, INTOLERANCE, REVIEW: TO LIVE OUT LOUD, REVIEWS FOR HIS NAME WAS BEN, REVIEWS: HIS NAME WAS BEN, REVIEWS: THE PERSECUTION OF MILDRED DUNLAP, Reviews: To Love Out Loud, Santa Paula Animal Rescue Center, THE DREYFUS AFFAIR, TO LIVE OUT LOUD, TOLERANCE, WHERE TO BUY. Bookmark the permalink.