Posted on December 11, 2016 by The Persecution of Mildred Dunlap 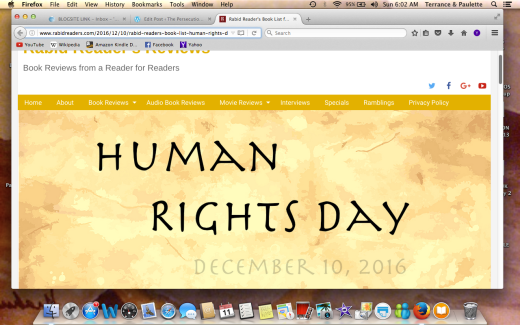 Their review of my book:

Mildred Dunlap is a generous and loving soul, but in the eyes of the townsfolk, already has one strike against her—in the tradition of her father before her, she doesn’t go to church. When news of Oscar Wilde’s conviction in England hits little Red River Pass, Nevada, she discovers that she might have something else to fear. Edra, known to all as Mildred’s cousin, is actually her life partner. With the townsfolk calling for Wilde’s blood, what will happen if they find out about her? She has a plan to ward off the busybodies but can she pull it off or, in the end, will everything be made worse?

Paulette Mahurin, a nurse, conceived this story from a writing exercise done for a class in which the writers has to choose a picture and write a ten-minute-mystery based on the picture. Her picture depicted two women huddled together, and she envisioned them as Mildred and her partner, Edra. I wonder, if at the time, she realized how that idea would develop and become the profound and impactful novel that is The Persecution of Mildred Dunlap.

Set in 1895, the novel has a real feeling of history though the themes carry over into today. Mildred and Edra are good people who are happy and confident in who they are together and fear not what others think of them but what they might do because of those thoughts. An overlying theme is that the crueler townsfolk (Josie) aren’t happy unless everyone is living exactly as they believe they should live.

Mahurin’s characters are extremely well rounded. When we meet Gus, the shopkeeper, we are told that he is kind and friendly and loves what he does but that he has secrets. When we meet Josie we know that she is bitter in a way that most people can’t stomach and that she shares his misery with everyone around her. At first blush, Josie may seem a bit much in her hate of everyone—even those who are friends—but, as with people in daily life, it soon becomes evident that her vitriol is about herself and not anyone else.

We meet Charley as he watches his beloved wife waste away from cancer. Because of his deep love for his wife, he becomes the center of Mildred’s plan. She will feign interest in him and he will never reciprocate because of the depths of grief he’s experiencing. Mildred may not be attractive, but she’s kind and in a time when he needs kindness, Charley reacts to her caring spirit. To some degree, Charley stands for the reader. He’s questioning his life and its purpose so what do you do when you don’t philosophically agree with the person who is filling a deep void in your life? Do you cheat yourself out of the friendship and join the naysayers or do you react to the good in them?

As the story goes on, Gus acts as something of a Greek Chorus within the novel commenting on the state of society and leading Charley (and the reader) to the realization that he should question what he’s been raised to think. Gus tells Charley at one point:

Most people are living what they think they should instead of what they want. Before you know it, your life has slipped away and you die miserable.

That quote to me is the core essence of the novel. Do you live for others or do you live for yourself? Neither Mildred nor Charley wants to live for anyone, but himself or herself. They are happiest when left alone, but realize that they each have a need for the other—the need for someone they can count on when times are hard.

One small issue that I have is the ages at which Mildred and Edra are sexualized and that they are, indeed, first cousins once removed. In the scope of the story, neither of those briefly mentioned facts matter. The story is truly about hate, prejudice and changing attitudes.

This novel was a fabulous read. Paulette Mahurin is donating money from the sales of the novel to an animal rescue charity.  I urge my readers to to read an excerpt and pick The Persecution of Mildred Dunlap by Paulette Mahurin up today:

Paulette Mahurin in the media:
Watch and listen to the interview with Paulette Mahurin by Ken McAlpine (National Geographic writer and author of several books) which was aired on Channel 6 in Ventura County here.

To read the interview with Paulette Mahurin and Rabid Reader’s Reviews, click here.

The year 1895 was filled with memorable historical events: the Dreyfus Affair divided France; Booker T. Washington gave his Atlanta address; Richard Olney, United States Secretary of State, expanded the effects of the Monroe Doctrine in settling a boundary dispute between the United Kingdom and Venezuela; and Oscar Wilde was tried and convicted for "gross indecency" under Britian's recently passed law that made sex between males a criminal offense. When the news of Wilde's conviction went out over telegraphs worldwide, it threw a small Nevada town into chaos. This is the story of what happened when the lives of its citizens were impacted by the news of Oscar Wildes' imprisonment. It is chronicle of hatred and prejudice with all its unintended and devastating consequences, and how love and friendship bring strength and healing. Paulette Mahurin, the author, is a Nurse Practitioner who lives in Ojai, California with her husband Terry and their two dogs--- Max and Bella. She practices women's health in a rural clinic and writes in her spare time. All profits from her book are going to animal rescue, Santa Paula Animal Shelter, the first and only no-kill shelter in Ventura County, CA, where she lives. (see links below on Ventura County Star Article & Shelter) To find out more please go the The Persecution of Mildred Dunlap on facebook or Amazon or e-mail us at the gavatar addresses. Thank you. (photos: of Paulette, her family, and a reading at The Ojai Art Center, July 2012)
View all posts by The Persecution of Mildred Dunlap →
This entry was posted in ABOUT THE BOOK, REVIEWS, REVIEWS: THE PERSECUTION OF MILDRED DUNLAP, TOLERANCE. Bookmark the permalink.